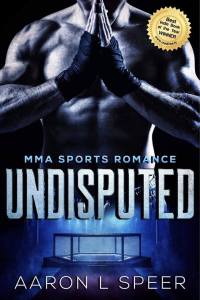 Owen Gasnier is a gentleman even inside the Cage. As much of a gentleman as one can be having an undisputed record with every win by a knockout. People LOVE him.

Overworked barista Tegan Holland doesn’t know he exists. Not until ten minutes before her friend Fiona drags her to the biggest cage fight Sydney has ever seen.

By the time he heads back to his training camp in the States, she’ll never forget him. But should she let him forget her? He’s chasing his dream. He doesn’t have time for her. Does he?

For Owen, the hits just keep coming. Trash talking opponents, sensationalist media, and someone’s out to ruin him for good. He can’t put Tegan in the middle of it. Can he?

Soon, will any of it matter? Cause life has other plans, and NOTHING hits harder than life.

Tegan hummed at that, looking around the lush elevator and drumming her fingers on the gold coloured railing “Have I ever told you moving elevators turn me on, Gaz?”

He faced her, deliberately coming closer, so she had to press her back against the cold wall. “Really…” he said, running his thumb along her lips and bringing the fingers of that hand down her chest. Slowly. Just brushing her outfit. Down, in between her breasts, to her stomach.

Tegan held her breath, looking straight at him as the carriage jiggled with its ascent. His hand went past her belly and she let out a quick breath. A shocked sigh. He had grazed her groin with the flat of his palm and curled his fingers under the hem of her skirt. She kept eye contact as he made a tighter fist holding it, not daring to blink as the skirt crawled its way up her thighs.

She clenched the railing harder as the tightness around her upper thighs increased. She bit her lip and leant her head back. His fingers were centimetres away from her underwear. But his grip was deliberately tightening her skirt around her legs as it rose. Teasing her.